I stomped around the house wondering if I could pull off "chav mum". "I've got this!" I thought to myself. Diego, my 2 year old teenager gawped at me as I threw my weight around the house, growling at him every so often to complete my new look. If he could roll his eyes, that's what he'd be doing. 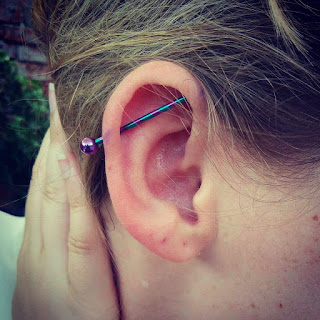 I pulled on my joggers and showed off my tattoos and piercings. I even attempted the shaved head look with some braids. I felt pretty great. Looking in the mirror had never been a pastime of mine, but I gazed at my new reflection eagerly. That's me!


Due to the huge amount of media I had found myself consuming lately, I had been worrying about turning into some kind of violent, gobby criminal. If I lost sleep over anything, this would be it. The older generation that I know had expanded my knowledge on the topic. And that meant that I was going to undergo some terrible, hell-rising transformation over night! I kissed one of the selfies I had taken on my phone, previous to the additional metal and ink. Goodbye my old friend, you will be missed!

Apparently not though. When I awoke the next morning I hadn't quite mastered my bank robbing plan. Gutted.

But in all seriousness, it doesn't happen.

At the end of the day personality is hard to change. It takes work or difficult times to change the person that you are. Not piercings, not tattoos. If it were that easy we'd all be getting tattoos to stop jealousy, or a piercing to combat our hatred of that scary animated balloon-thing on children's TV.


We were born how we are. I am still me. Your children will still be them!