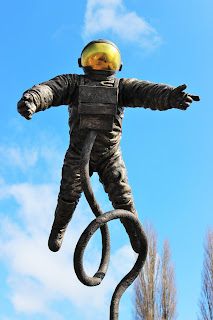 I placed my darling son in his playpen as I battled to keep my eyes open. I never wanted to be one of these parents who chose a quick way out; I vowed to constantly entertain my child with educational games and stories. Yet, after another early morning wakeup call and a couple of hours at work I was ready to drop. I faltered, nearly losing my balance. So I piled up his playpen with safe toys to keep him occupied and proceeded to sprawl across the carpet in front of the fire. My boy was safe. Now I could nap...


It took me 40 minutes before I finally began to drift… I felt a sharp pain hit me in the face and was sure I had been blinded as I attempted to open my eyes. I searched for the weapon that had almost knocked me out. My giggling toddler stood watching me, at least three metres away. His instrument of choice lay by my feet. As I came to terms with the fact that my son had attempted to attacked me, that he must be the next world class baseball player, and that he was finding the situation absolutely hilarious I realised that I wasn't going to get to sleep. Not today. Not tomorrow. Probably not for the next eighteen years.


Being a mother is the most tiring yet rewarding job you could possibly do and science has proven that there are many negative effects on the body due to lack of sleep. There are many books available, as well as help and support for anybody suffering from sleep deprivation. It is never an easy obstacle to overcome. Yet it is possible, in any circumstance, and it doesn’t always require a doctor. Just a simple shift in schedule.


Word count: 300
As seen in VOXX Magazine. Available to view at voxxonline.com