Laurence and His Inspiration

By Boneata Bell - February 26, 2013
I recently had the pleasure of interviewing my amazing friend, Laurence. This is my article. Journalism style. Enjoy. :)


Laurence Paul Short is a young man from England. He has many inspirations that all lead him to one ambition; to one day be a professional sports commentator. He hopes to do this by studying professional writing at degree level, followed by working his way through the ranks of journalism.


Among his inspirations is Jim Ross; a WWE Hall of Fame star, professional sports commentator. Laurence feels that he is a 'legend' as despite multiply strokes he has continued to work within the career that he loves. Laurence also feels that despite the public love of the stereotypical body, Ross is quite a largely built man but he is a huge success.


From the age of eight, Laurence would visit his cousins in London where they would play games and practise live commentary, beginning his love of wrestling and goal to become something like his inspiration. Jim Ross is sixty years of age, which is important too Laurence as he feels that 'it would be a little annoying if somebody younger than yourself was doing well, not particularly inspiring!' Laurence's admiration is professional only; he is not interested in becoming like him on a more personal level.


Amongst other inspirations are Johnny 3Tears and CMPunk. Laurence has that many that he feels it would take much time to name them all.


It is quite an individual love that Laurence has as he has not been influenced by family members or friends, he believes that his father is unaware of who Ross is, but does admit that both his mother and brother enjoy watching wrestling with him on the television. His mother has also taken him to watch the wrestling live on occasion.


Although Laurence feels that he would not go to any extreme measures to meet his inspiration, he would 'not do anything stupid', he does hope to one day meet Jim Ross and would be ecstatic if that dream came true.


Among the things that make him angry regarding his inspiration however are, when people have a bad opinion of wrestling and call it fake when they know nothing in detail about the sport, so are therefore of biased opinion. Wrestling had a large impact on his life, and he feels that those involved 'risk their lives for their audience, putting themselves in danger. People have died before, it is not a "fake sport" at all'. 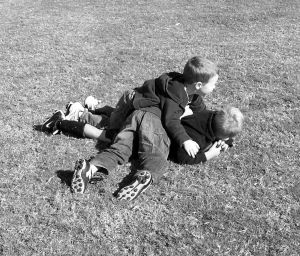 Ross has been fired on several occasions and suffered from personal issues, forcing breaks between his work. 'It gives his audience the confidence to come back and to carry on, no matter what stands in your way'.


Although Laurence is a huge sports fan, he cannot take part within sports directly as he suffers from a heart condition, quite like his idle, Ross. To be a sports commentator is 'the best seat in the house'. He is currently studying at University and following his dream into the world of sporting journalism.
- Boneata Bell
(Word count: 500)