Even The Sensible Crawl.

By Boneata Bell - December 18, 2012
So here it is. I had known this man for seven days previous. He was. Is. Handsome. Tanned. Dark hair, dark eyes. Tall. And older than me. Much older than me. Heaven in a cup basically. I met him on holiday, on a small island. A family island. I don't like touristy holidays. I ignored him. As simple as that. I wasn't looking for a man, and quite frankly I was sick of the 'fake' attention. On holiday they are interested in every walking breathing female that passes.

But my step-father noticed this one. Celebrity look alike. I shouldn't have pointed him out really, but I did, and my father was obsessed, like a bee to honey. With that he insisted I have my photo taken with him. I refused. I probably looked like a stuck up young British woman. I didn't care. I have never wanted a phony man. 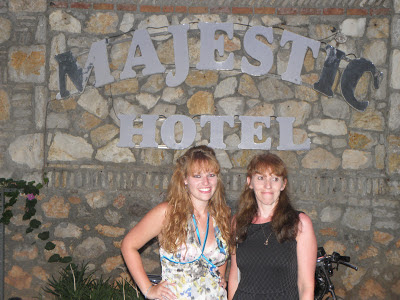 The next day we met him again, my step father is a rather friendly chap, so my mum, myself and this male ended up talking. My step father, as he always does, mentioned his fishing obsession. So the gentlemen took us out the very next day. In his car. The thirty-two year old man drove us around the island, showing my family everything they could have wished for. I was in my element. Completely oblivious to his growing feelings for me. Describing him as 'my father's friend'.

It was about, ten minutes after being dropped home that he dropped a hint. 'How old are you?' he asks. 'Nineteen'. I reply. 'Oh no, too young'. He responds with. For some reason I feel my heart do a giddy flip. Wondering if I am interpreting him correctly. I am. Returning on the night to his stall on the market, he makes my parents tea, and me, well he buys me two bottles of fresh drinking water. And ushers me to the side. Asking me if he could take me for a drink.

I got it then. He liked me. I had declined everybody else. Well, it's what you get on holiday isn't it, nobody will leave you alone. But I trusted this guy. In seven days I trusted him, I don't know why. But so did my father. Asking my father's permission, we went clubbing that night. And the next night. And the night after that. That's the night he had a break-down, and began crying to me. I couldn't leave him like that, so despite my wariness of my deadline, I ignored it. He asked if he could drive me somewhere, foolishly I suppose, I agreed.

He drove me to the beach, it was deserted and dark. Quite beautiful. That's when the realisation hit me, the situation I had put myself in. I am sensible. I always have been. But here I was, in a deserted place, in a foreign country, consumed by a couple of alcoholic drinks that I am not used to - therefore quite foolish on, with pretty much a stranger with a pretty face.

I was lucky. He put his head in my lap, told me of his life and his worries, we agreed to be friends. Held my hand and drove me home twenty minutes later. I was late. My parents were fuming. He was a gentlemen, I was a lady. I will see him again when I return.

My message though is, that despite the fact I am a sensible girl, despite the fact that my father is 'strict as Hell' I still ended up in a situation that could have been completely different, potentically dangerous. I could have been raped. Abused. I could be dead. My father never takes risks, I am escorted around the corner. I have never left the house at night-time alone. But it happened. He is a very close friend of mine now, and I look forward to clubbing with him again. I miss him dearly. I admit that I am happy I took the risk.

However, ladies and gentlemen, even the sensible crawl.

Watch your back. Better safe than sorry.